Counters made for the Swedish Royal family

There seems to be no end to unearthing important new groups of counters and this article relates to a set made for the King and Queen of Sweden circa 1750 - 1755. The Swedish East India Company was founded in 1730 following the trading successes in tea and porcelain in particular of the Dutch and British companies. The Swedish flag was still flying in 1830 in Canton even though the Swedish company was in its last throes. 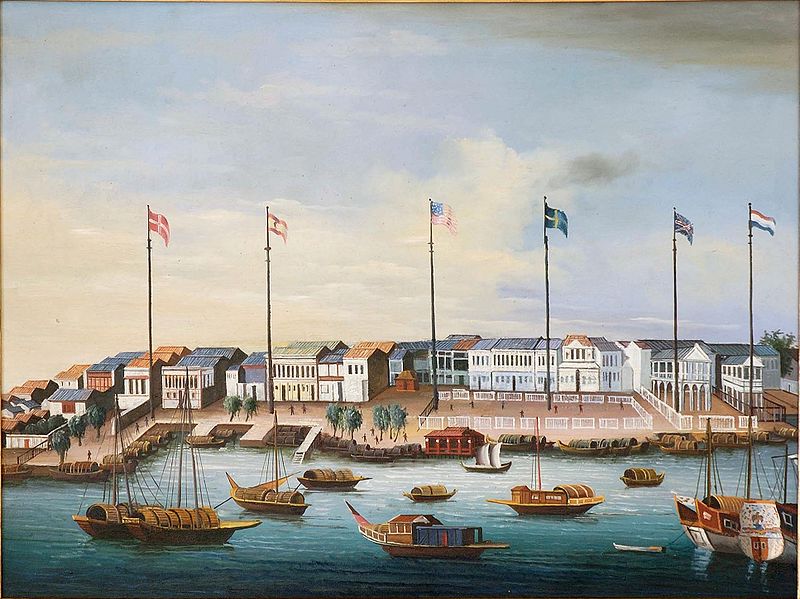 Among the tremendously fashionable Chinese products that had become available were, of course, gaming counters. By 1740 the trade in counters was well established in Canton and counters were enjoyed in many of the homes of the rich - indeed they were almost essential for the well-heeled Lords and Ladies of the time. The majority of counters were at this time based on  bookplates showing the arms, crest and motto of the family. However there was scope for innovation and this set was certainly different.

In 1743 Adolf Frederik of Holstein-Goltorp was appointed as the heir to the Swedish throne and in 1744 he married a very feisty lady Ludovika Ulrika, Princess of Prussia - the sister of Frederick the Great.  Numerous medals and medallions  were struck to commemorate this marriage. 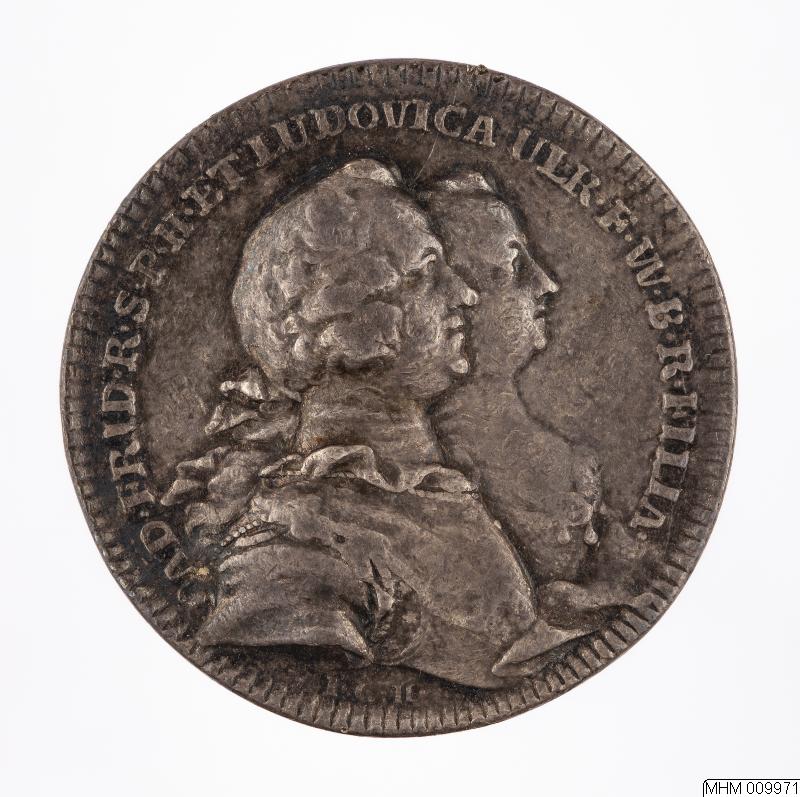 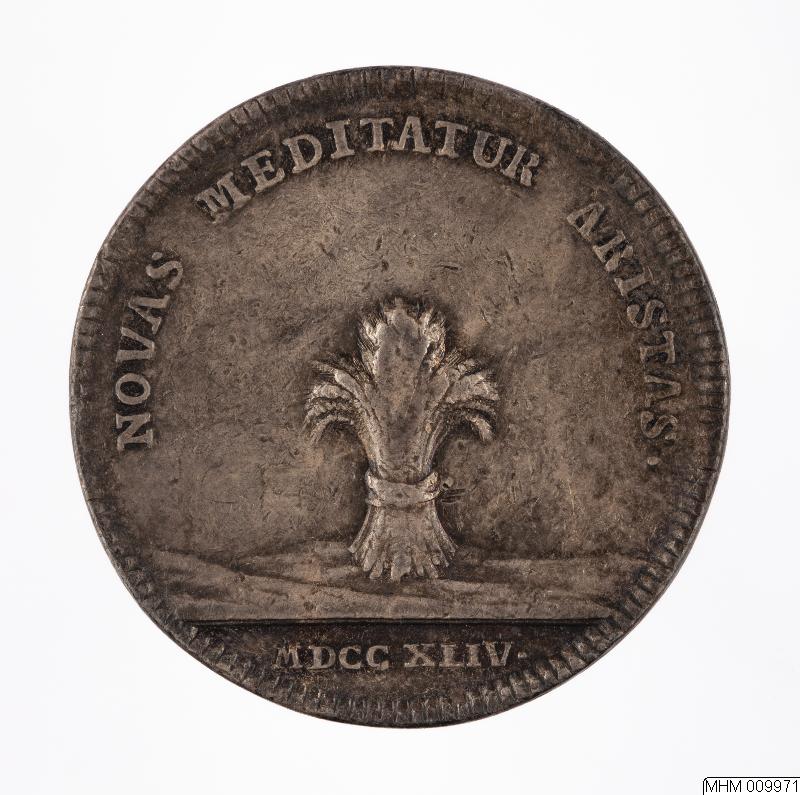 In 1751 Adolf Frederik and Ludovika became King and Queen of Sweden. One cannot be certain how the order for a set of mother-of-pearl gaming counters was placed but it was probably through the Swedish East India Company. And it seems likely that it was at Ludovica's instigation, as will become apparent. There were four different counters, all round in shape. They were copied direct from coins or medallions minted in 1745. The first showed the King and Queen in profile and just like the original medallion it was not surface engraved but carved in low-relief  which was most unusual for gaming counters of the time - but not unheard of. The counter shows the amazing adaptability of the craftsmen in Canton. Like the original in every way it bears the inscription ADFRIDSPHETLUDOVICAULRFWBRFILIA. To the reverse is the legend NOVAS MEDIATUR ARISTAS (Hoping for new harvests) dated 1744 in Latin numerals and showing a wheatsheaf. Of interest are the initials ICH  beneath the heads which are identical on the original medallion. 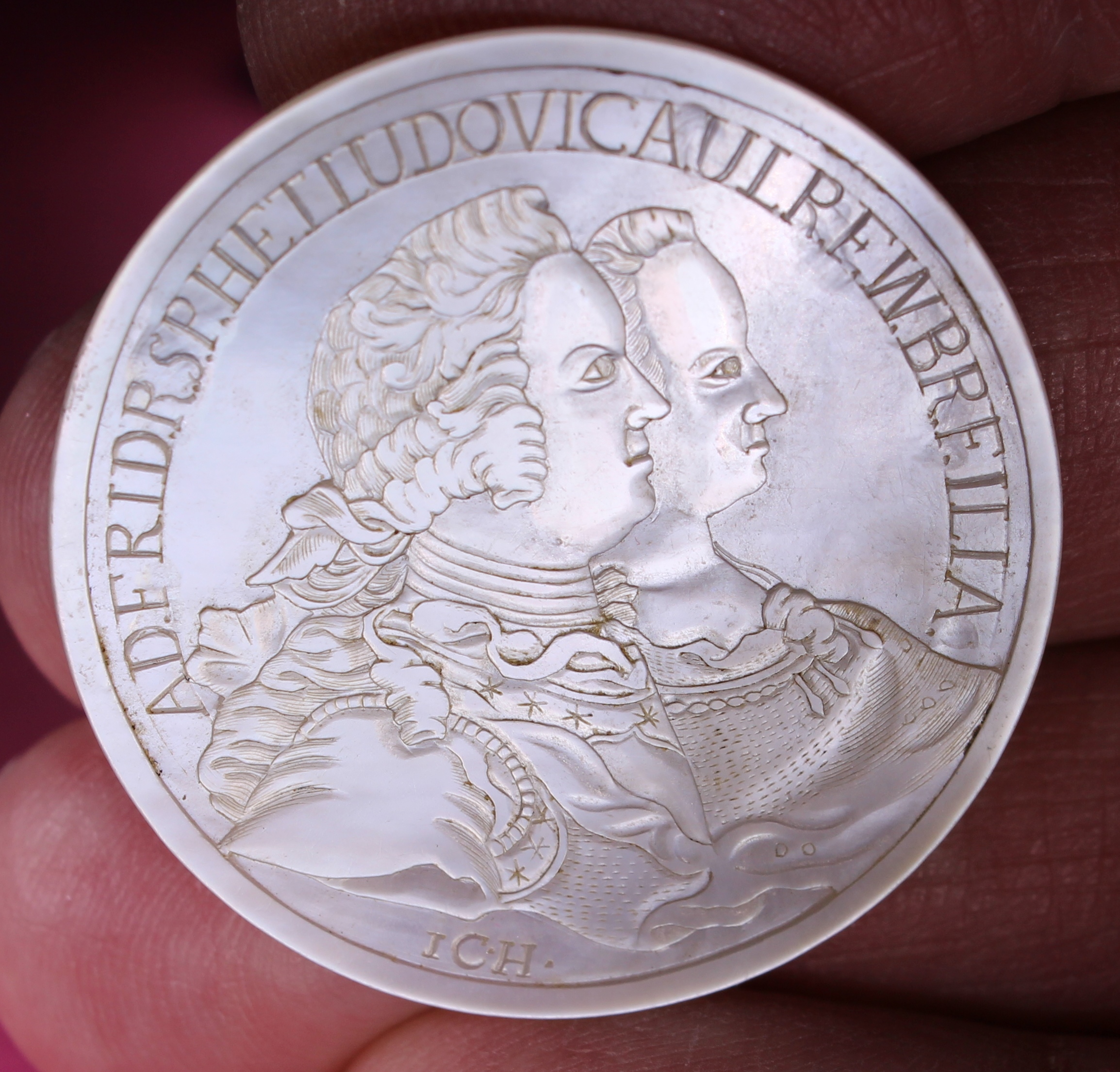 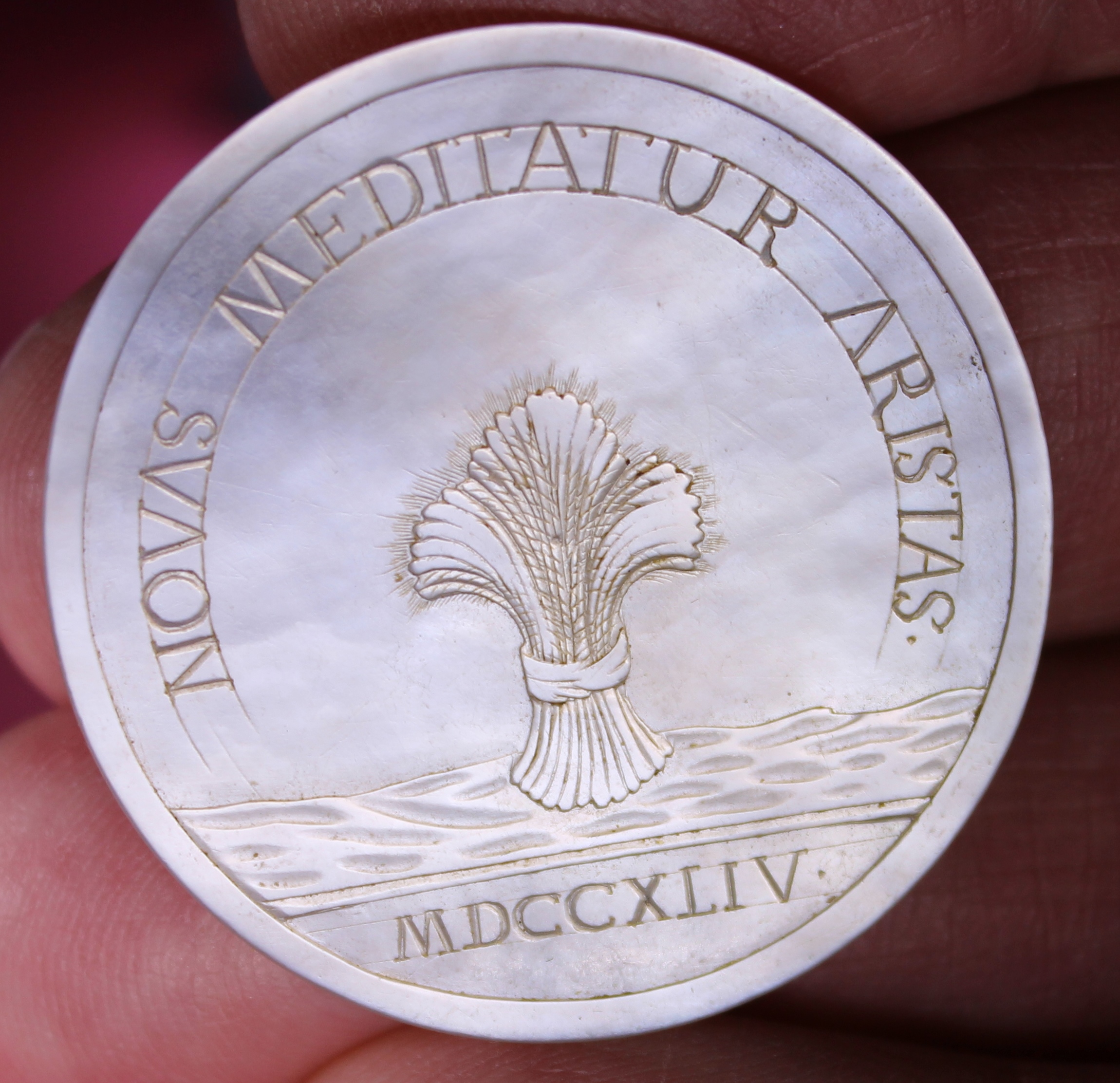 The second counter shows Ludovika alone, in profile and has the inscription LUDOVIKAULRIKABPRINCEPSSUECIAE () Ludovika Ulrika Princess of Sweden). To the reverse is an eagle bringing a pearl to the earth, the legend COELO DIMITTITUR ALTO ( It is sent from heaven on high) the date 1744 and the three Swedish Royal crowns which were the official  arms of Ludovika. It is also of great interest that the symbolic eagle with a pearl was also used identically to the reverse of counters made for the UK bankers Freame Gould ( founders of Barclay's Bank) and with the initials of the South Sea Company. 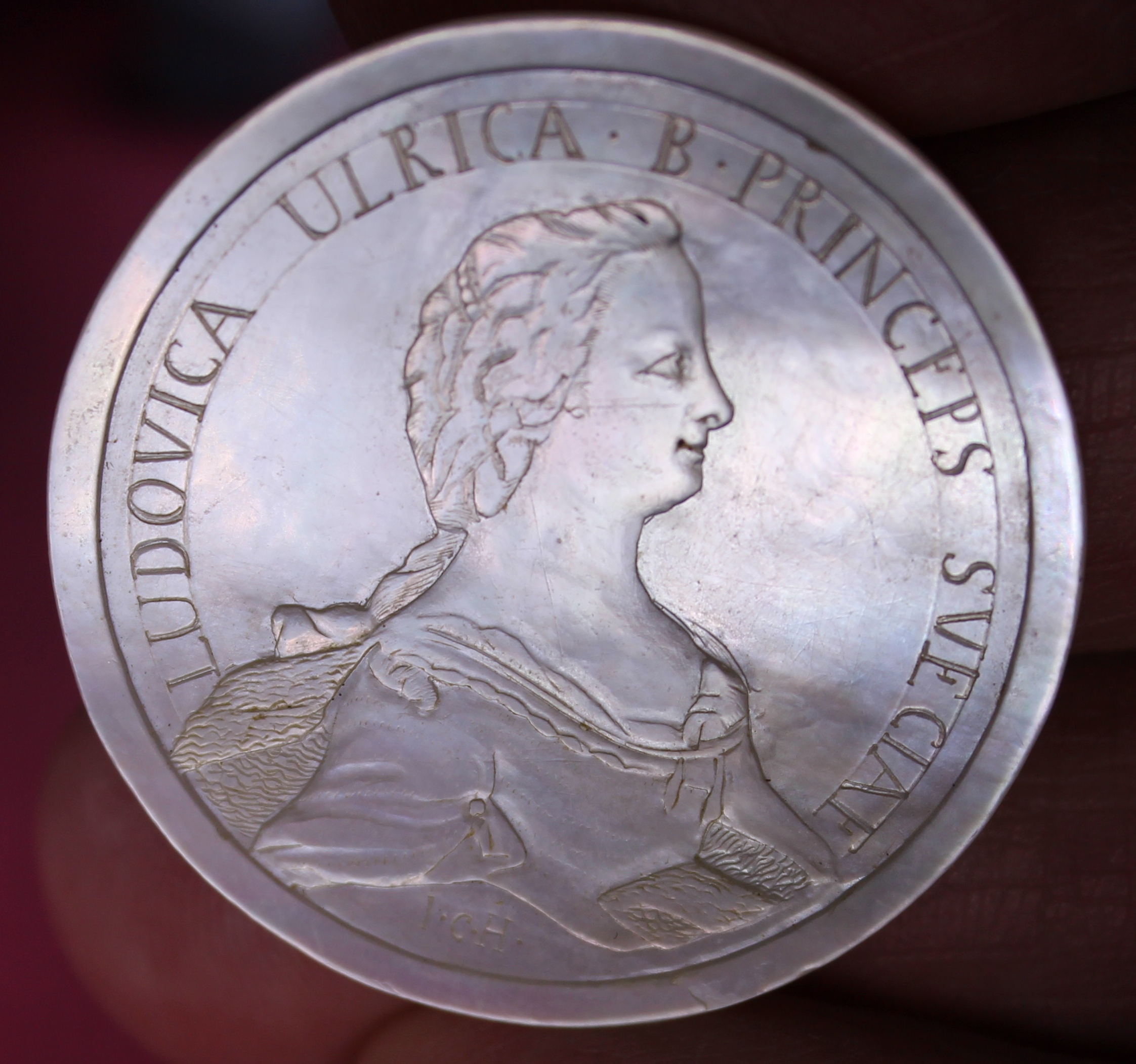 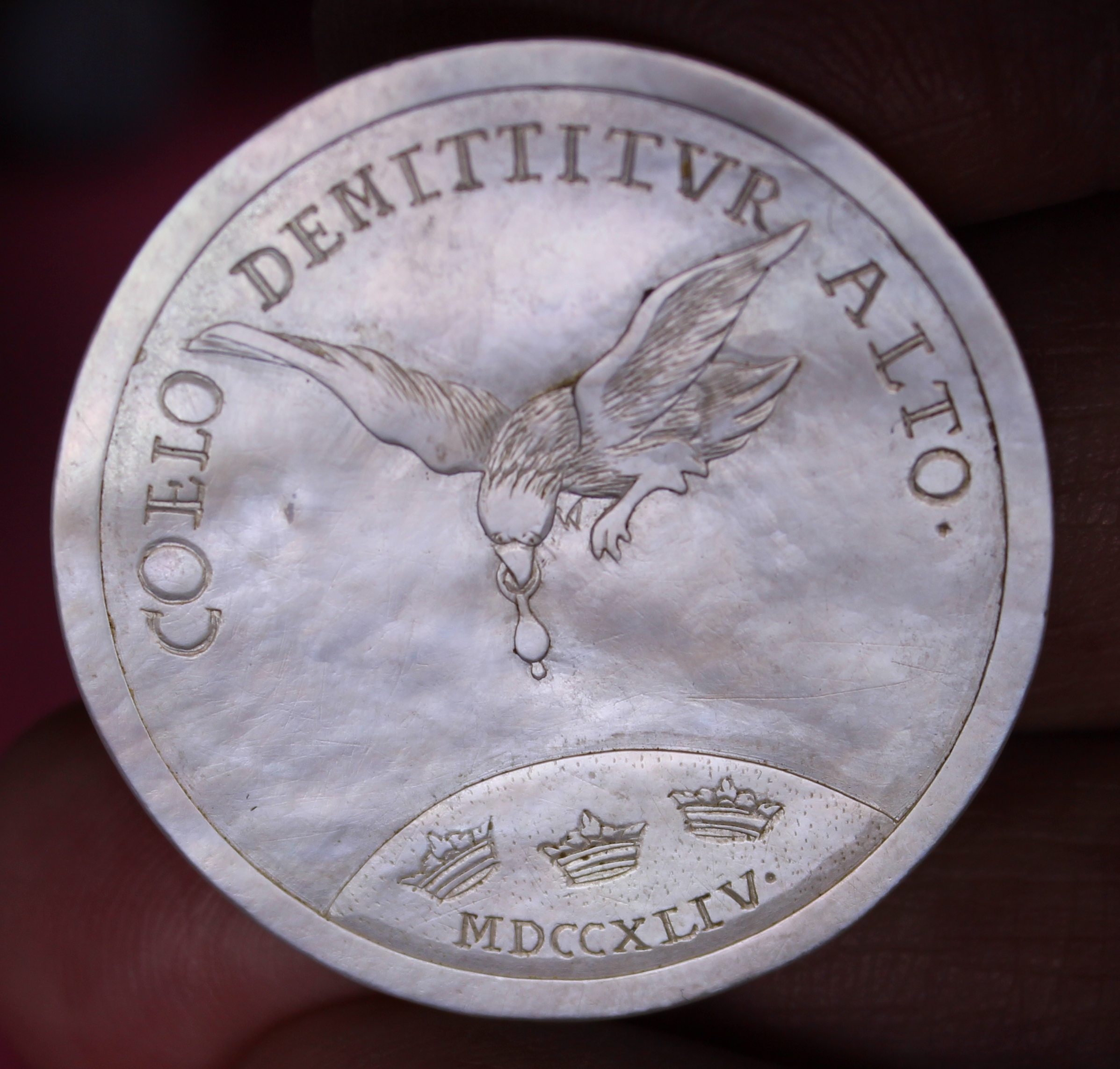 The third counter has simply the initials (LV) LU with the Swedish Royal crown - Ludovika Ulrika with the inscription LUDOVIKAULRICABPRINCEPSSUECIAE ( Ludovika Princess of Sweden). To the reverse ALDELES SWENSKI (Completely Swedish) and a heart plus the date 1745. 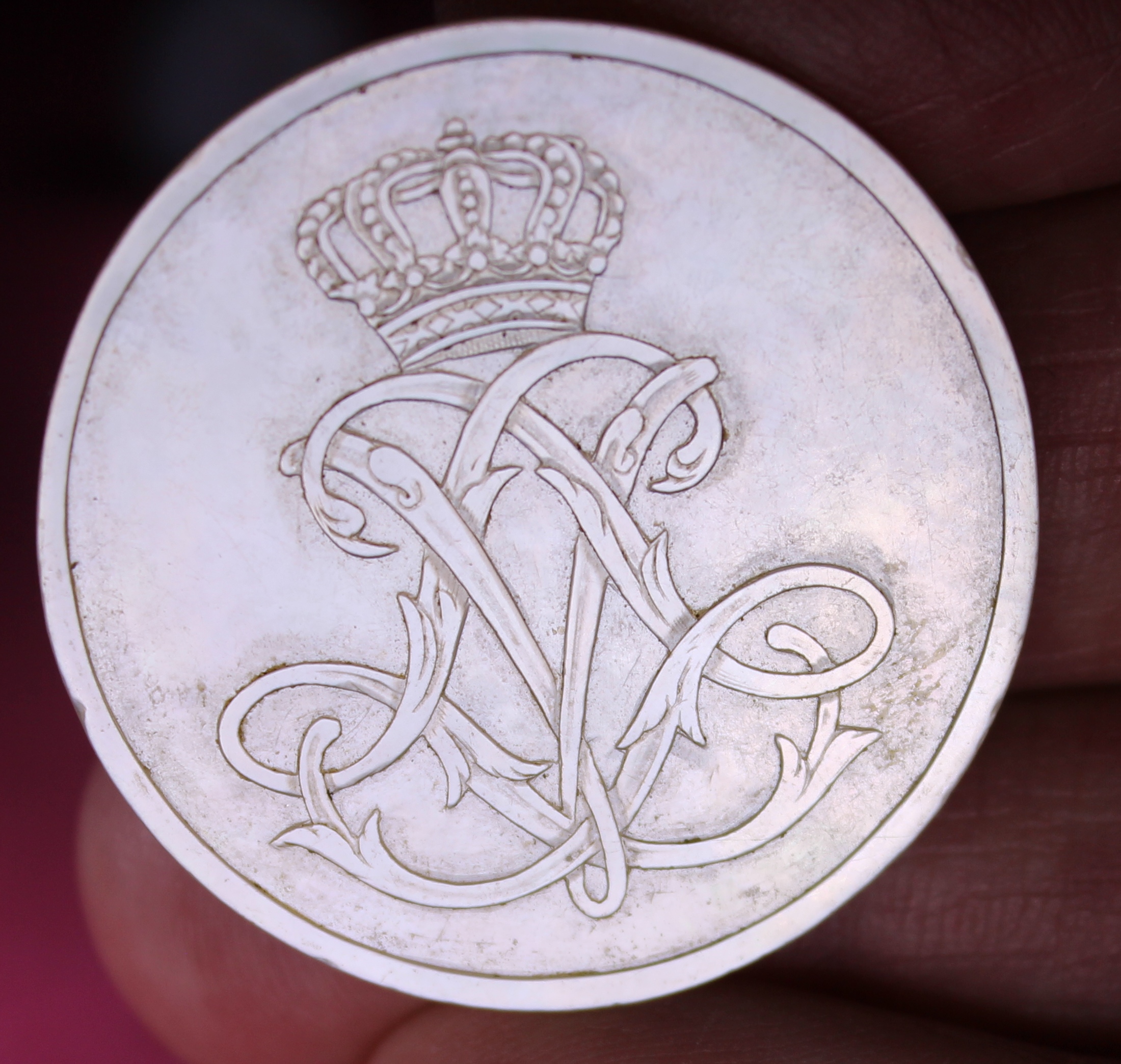 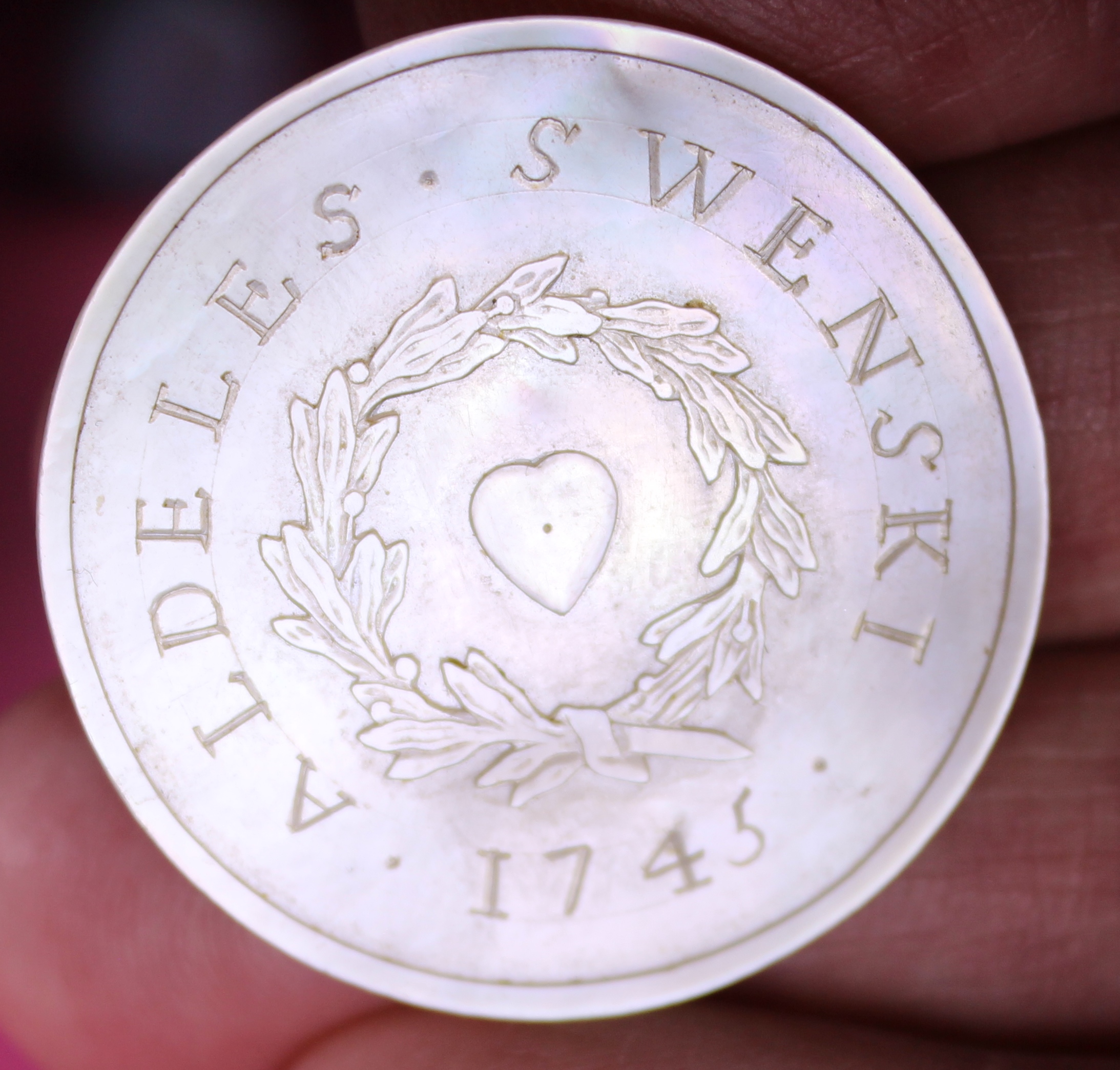 And finally the fourth counter is similar to the previous one but to the reverse the French inscription PLUTOT MOURIR QUE D'ABONDONNER LA VERTU ( rather die that abandon Virtue) a quotation from Plutarch. And also of intertest is the fact that the French is not completely accurate as an extra accent has been added to the 'u' in Plutot! 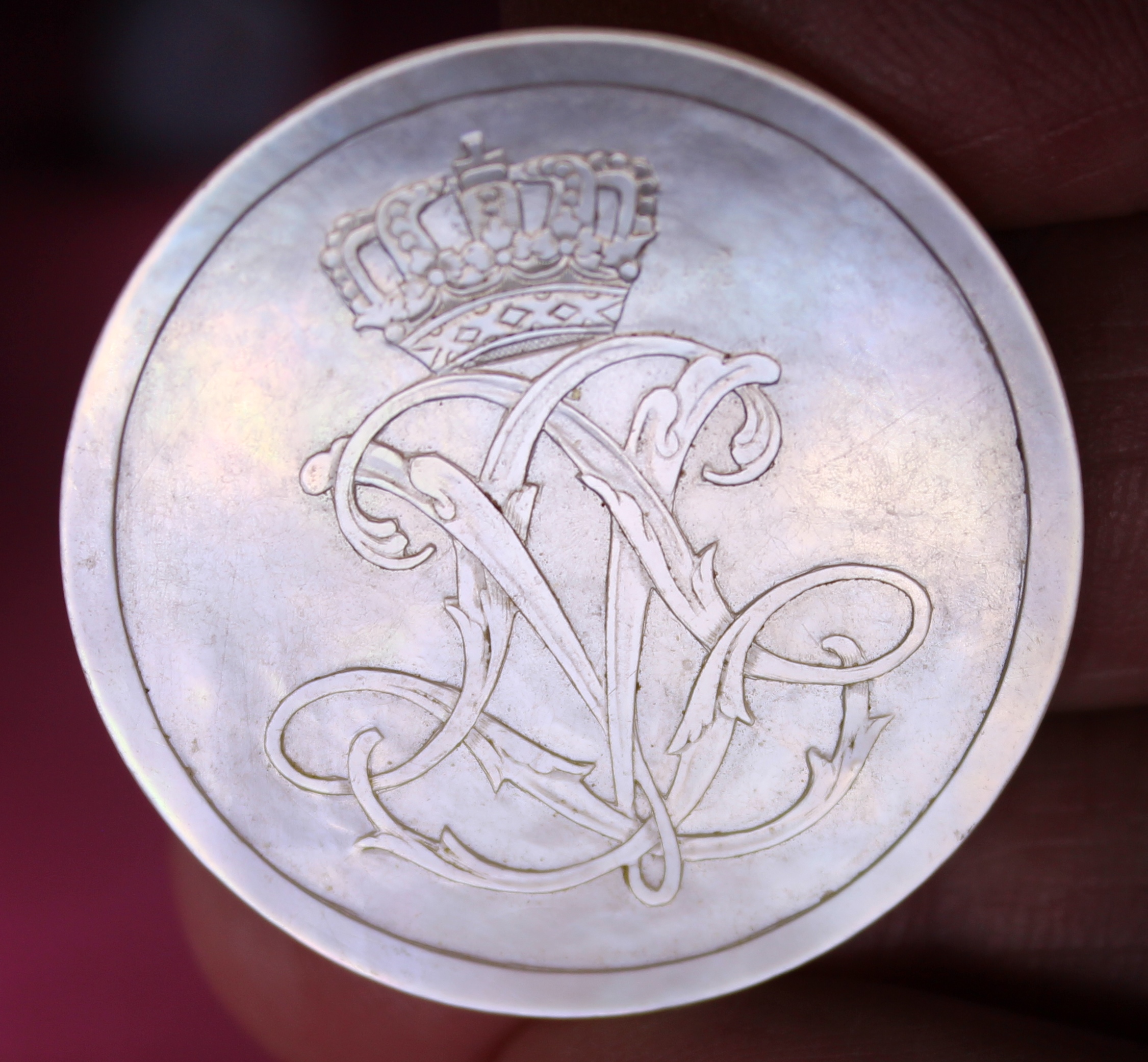 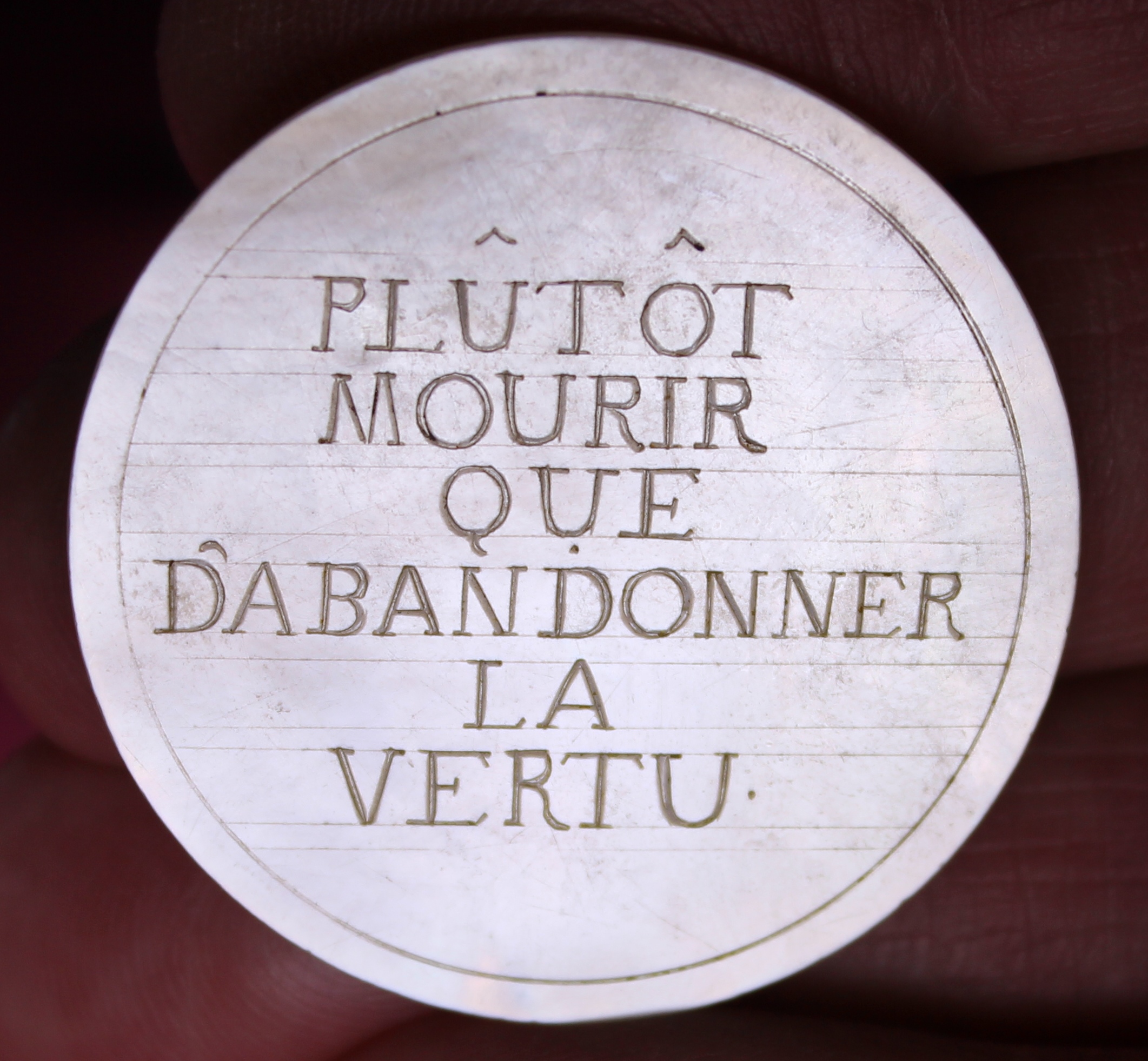 I have not found any reference to this set of counters but it seems to me that this set was made at Ludovika's instruction; had they been ordered by Adolf he would surely have figured more prominently. There are still aspects that require more research: why these quotations to the reverses? These are truly  beautiful counters with an amazing history - and some secrets!