A history of Chinese Gaming Counters

Chinese mother-of-pearl gaming counters probably first came to Europe in around 1700 as the inspired innovation of a sea captain or else a “supercargo” – one of the men primarily responsible for trading – of the East India Company boats when they began trading with China. European countries were opening new markets in many corners of the globe but the first traders to come to China must have found it immensely exciting. New products were available to bring to Europe: silk, tea, porcelain. The demand for these far outstripped supply. The Chinese, into the bargain, were keen to trade for items which were commonplace in Europe. Fortunes were there to be made.

When tea was first sold in Europe it was the most exotic and fashionable luxury. Competition between the crews to bring back to Europe the first crop of the new season each year, was intense and unbelievable prices were paid.

Porcelain was also brought back – some claim this was at first ballast for the ships’ cargoes; here again, at a time when people in Europe were eating from wooden or metal plates, the incredibly delicate white porcelain with cobalt blue decoration caused a sensation. In London people fought for services. Some people even attributed supernatural powers to this porcelain – they believed it could reveal the presence of poison in their food. Add to these bounties silk with vivid colours, lacquer wares, and you have some idea of the luxury that these goods represented.

Sea voyages were incredibly hazardous, though; uncharted seas, unpredictable currents and winds, pirates waiting to pillage; but this could not deter the traders from heading to Canton when the Emperor Kangxi legitimised trade with Europeans.

The Chinese have long enjoyed the reputation of being some of the world’s most compulsive gamblers. So this enterprising trader must have seen the Chinese gambling with simple yet fine mother-of-pearl counters decorated with traditional Chinese designs, and brought some back to Europe.

The counters must have been a success because repeat orders were sent. The supercargoes were allowed space in the ship’s hold for their own personal trading and it seems that these counters were soon being brought back in large numbers. The Chinese decoration was quickly influenced by European tastes. In much the same way as the production of porcelain was an amalgam of European and Chinese styles, so it was with mother-of-pearl counters. It was the height of fashion for the rich families of Europe to have personalised Chinese porcelain dinner-services. Complex orders were placed requiring several hundred pieces of porcelain to be decorated with a monogram, family crest, coat of arms or in some cases all three, copied from an original sent with the trader. The logistics of this are quite incredible: an order was decided perhaps in Devon for three hundred pieces of blue and white porcelain of a specified style with highly detailed decoration to be copied from a library bookplate, following complex heraldic conventions. This order was taken to London by a servant – in itself a risky business in the early 1700’s. The order was given to the East India Company supercargo or captain; the order then went around the world in a sailing boat as one small part of a complex series of deals; it was then delivered to a Chinese merchant in Canton in one of the “factories” or “hongs” on the banks of the Pearl River in Canton. It is claimed that some of the Chinese merchants did not commit the order to paper but relied on their memory. An agreement was then made to return to the trading point in a year’s time to collect the completed order. Hundreds of such orders were produced and survived the journey back to London, the crowds in the auction houses and the journey back to the original country estate in a cart. Many pieces still survive 300 years later.

To cut a long story short, counters were produced to match the personalised porcelain services. The cost of a set of counters was huge (the equivalent of several thousand pounds at today’s prices) so it was only the very richest families which could afford them. Quite a few of the traders, supercargoes and sea captains, however, seem to have managed to procure themselves a set. So these orders often accompanied the orders for armorial porcelain services and will have taken two, perhaps three years to complete.

Demand for counters clearly was high. The earliest counters reflect a strong Chinese influence, similar to the original counters, with “sketchy” flowers, single line borders (if any) and sparse decoration. But fashion moved on quickly and new shapes and techniques evolved. The earliest sets were probably in two shapes – rounds and fishes. Oblongs and squares were soon introduced. Borders became more pronounced and then evolved until late in their history they were the dominant feature of the design. Cross-hatching was a technique which soon developed, where fine shading was applied in certain parts of the counter. An idea of the development of these styles is given in the previous pages of this website. The quality of the mother-of-pearl develops; edges become milled like coins, counters become larger and thicker. By around 1840, counters have undergone a complete transformation.

The techniques used by the Chinese workers have never been equalled or even fully understood. Attempts have been made to emulate the technique of “cross-hatching” which became very widely used in China. Even nowadays with electricity, computers and so on, it is hard to imagine us being able to produce counters with such intricate and artistic designs. Even after handling thousands of these counters, I still find it hard to understand how they were produced around 300 years ago. The amazing fidelity of the copying, the minute detail evident on many counters defy belief; but to produce in large numbers by hand sets of perhaps 140 counters whose decoration is, to all intents and purposes, identical is hard to imagine. Some sets even contained a variable decorative feature; from about 1790 scenes of Chinese life in a small roundel were popular. Sets were produced with different scenes in every single roundel. It is thought that these scenes retell stories or illustrate poems. These beautiful illustrations are as likely to be seen on the “off-the-peg” counters as in the armorial sets. The counters were identical in every other aspect.

I feel guilty in having dealt almost exclusively with “elite” counters, which are extremely expensive and hard to find. Yet there is a wealth of these ready-made counters which display every bit as much decorative skill and creativity as their “posh” brothers. But I mentioned earlier that the only way to be able to date counters was to link up with the orders for armorial porcelain. Reference to the borders and styles of the dated counters gives us a clear indication of the development of non-heraldic counters.

So it is clear that the traders were soon able to buy large numbers of ready made counters with a blank roundel for possible future engraving or decoration in Europe. This meant that the lengthy wait was no longer necessary. Counters engraved in Europe are usually fairly easily distinguishable by the absence of the ultra-fine cross-hatching behind the design or monogram inside the roundel: it could not be performed in Europe. The quality of the best of these non-specific counters equals the best armorial counters.

The history of counters, in its last period from 1820 to 1840, entered a distinctive phase. The supply of top quality shells for mother-of-pearl counter production was clearly very variable. It is often claimed that the very highest quality was seen between 1790 and 1800. By 1840, counters had become much enlarged, thicker, often had shallow- or deep-carved designs and may also have shown fretted (pierced) borders. This may have been a desperate attempt by the producers to attract more business at a time when social habits in Europe were moving away from card games which required counters (games such as Quadrille, Pope Joan etc.), towards the new craze for whist, which was scored using whist-markers, not counters. Demand seems to have stopped in around 1840. The craftsmen, suddenly redundant, adapted their skills to produce all manner of other decorative mother-of-pearl items – brooches, fans etc..

And so the production of counters in China came to an end. Fortunately for us, these beautiful artefacts have been rightly treasured and have survived the years. Hopefully they will continue to be cherished: as people become more aware of their amazing history, surely they cannot fail to appreciate their intrinsic beauty and unique charm. 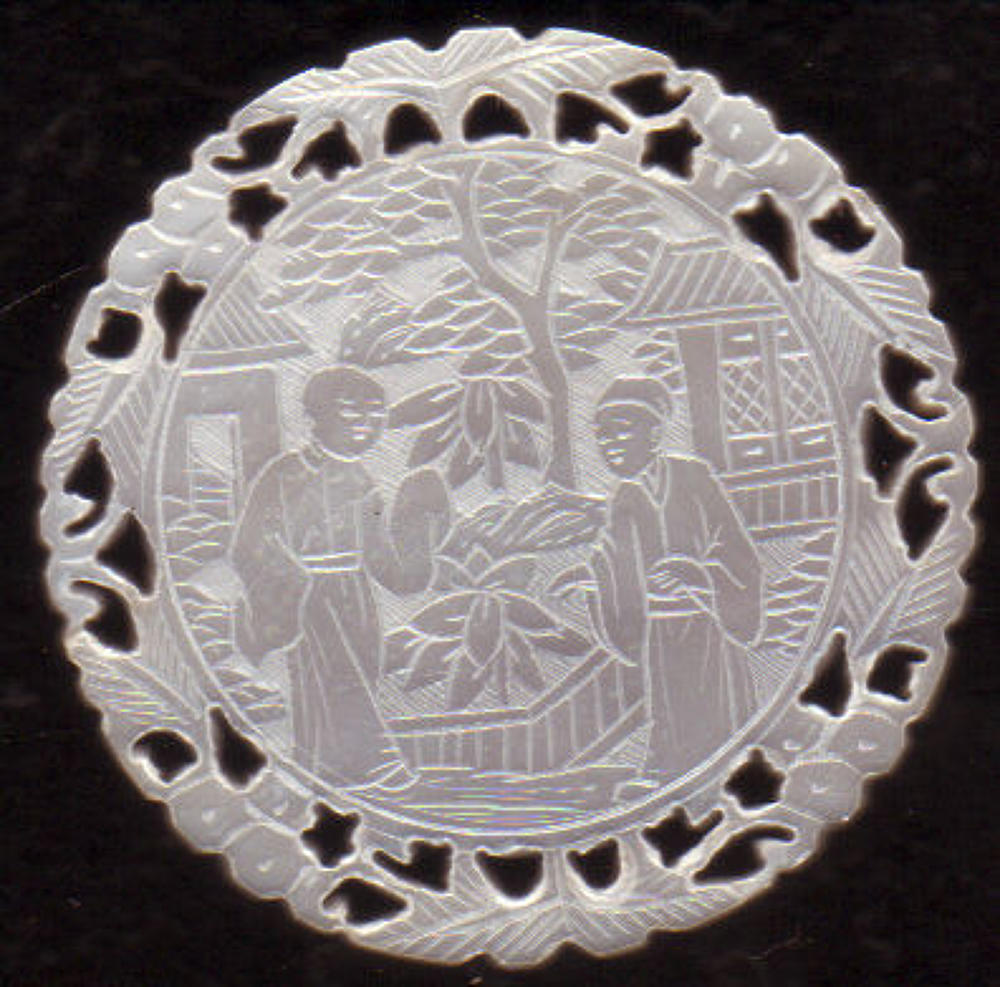